Hidden behind latex and cloth, many of our beloved superheroes keep their identities secret and lead fairly ordinary lives when they are not out fighting reckless villains. But what if biometric recognition systems were to enter the comics’ universe? Clark Kent wouldn’t stand a chance of covering up his “sidejob”! Which other superheroes would be uncovered?

The eye of the bat

Could the wealthy and well-known billionaire Bruce Wayne still confidently walk the streets of Gotham City if biometrics existed there? Probably not: too many cameras have recorded the flaming eyes of the Batman confronting the darkest mobsters, and a biometric iris recognition system could in fact reveal quite easily that Batman and Bruce Wayne are the same person.

Iris recognition technology is generally flawless for identification. The complex patterns of the iris – the coloured and beautiful circles of our eyes – are unique, stable, and can be seen from some distance. That makes it one of the most reliable biological features for biometric recognition.

Iris recognition uses video camera technology with subtle near infrared light to illuminate the iris and identify the unique patterns that are not visible to the naked eye. These patterns of lines and colours are analysed and encoded in a digital template that is then compared with database recordings for verification or identification.

High-profile lawyer by day, dark superhero by night, Daredevil cleans the rough streets of Hell’s Kitchen from crime whilst Matt Murdock keeps working as a regular attorney in the same neighbourhood. Is his secret identity safe? The Man Without Fear hides almost entirely behind a red mask, but a biometric gait recognition system may be able to reveal his identity simply by checking the way he walks.

That’s right, biometric recognition systems are not only based on the physical human characteristics of an individual — like eyes or fingerprints — but they can also analyse behavioural features, such as the gait. Gait recognition technology inspects a set of peculiar parameters, such as step length, speed, cadence and the rotation and the angles of hips, knees and ankles. It is unobtrusive and can be done with relatively simple tools. Its only limitation is that, at the moment, it is not yet highly accurate.

As for our red vigilante, gait information could be double checked by adding facial recognition that analyses the disclosed features of the face, such as the mouth and chin. Tough times for the devil, eh?

Classy glasses are not enough

When she is not being a superheroine, Wonder Woman is Diana Prince – a classy woman who wears glasses and who’s been seen working as a United Nations translator, astronaut, intelligence officer, businesswoman and so on over the years. But is a pair of glasses really enough to protect her secret identity?

Even if lenses can actually deceive human perception in some way, it is much more difficult to fool a good facial recognition system. Glasses with clear lenses will generally not be a problem for facial recognition technology as the key eye details are still visible: the shape, the position and the distance between them. Sunglasses may hide these features, yet software considers other facial characteristics, such as the shape and position of nose, cheekbones and jaw, meaning faces can still be detected with up to 30% occlusion.

So, how is it that the identity of Diana Prince has remained secret until today? The United Nations should definitely invest more in biometric security systems for their staff – at least in the comic world.

Watch out for the balloon!

Although Spider-Man is masked from head to toe, even his secret identity could be put under strain. In fact, the penniless photographer Peter Parker does not seem to be trying too hard to disguise his voice when he wears the clothes of the agile web-slinger.

Could a voice recognition system then reveal his real identity? Probably yes, as biometric voice technology has become more and more reliable. Multiple parts of our body – each one with a unique structure and size – contribute to shape the way we speak, making the voice a unique and individual feature. Biometric technologies reduce every single spoken word into different segments of tones that can be described by unique mathematical models. A human voice can thus be stored in a database like any other biometric information, such as fingerprints or face templates, and compared for authentication.

Spider-Man should try to avoid interviews if he wants to keep his identity a secret for much longer! 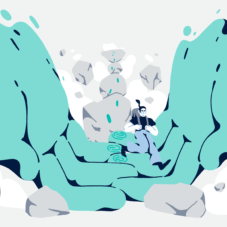 The Value of Trust in post-truth era

Weak, skinny boy; super-soldier with fantastic physical powers; once dead and come back to life; hibernated for over twenty years — the body of Steve Rogers aka Captain America has been through a lot of shocking experiences. Yet one thing certainly has not changed: his fingerprints.

Their unique and stable character – and the ease of registering them by simply using ink – made fingerprints one of the first physical features used for biometric identity authentication. So, it would be extremely easy to verify the identity of Captain America through fingerprints.

Better keep your gloves on, Captain.